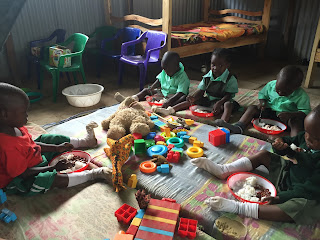 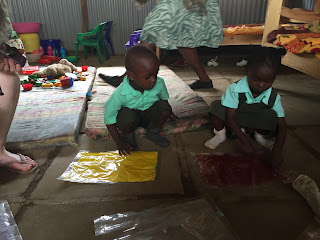 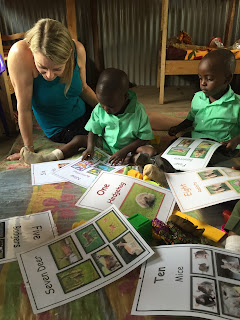 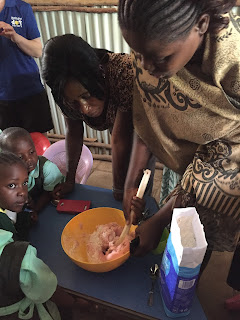 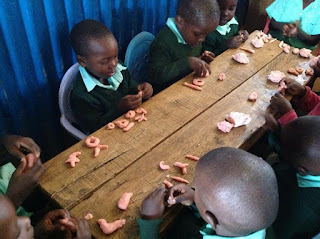 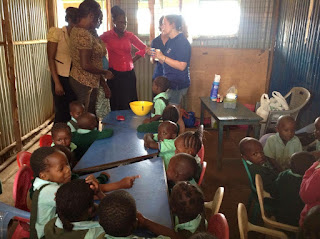 First job of the day was the Supermarket. James took us to the Metro and on the way he showed us the dump site where the school and nursery was started, and children were taken off the streets. At the supermarket we bought flour, salt, oil, food colouring, essence and cream of tarter. We also bought a bowl, spoon, cup and rolling pins. Airtight containers were bought too. A kettle was purchased for boiling water for the playdough. A cd player and a 25metre extension lead was purchased for implementing Boogie Mites. We needed the lead as the electricity is only in the main building. The staff in the supermarket tested our electrical goods, as there are no refunds once you have left the shop. Then we returned to the nursery.

We visited the children in daycare and sat with them while they ate their lunch. There are seven children in daycare at the moment. Two were off sick today with malaria. All the resources that were bought last year were being played with, or were still there being used. Lunch was beans and rice, but we were informed that the children do have a variety of different lunches. They were offered a drink of water or a cup of warm tea. They ate until they were full, and didn’t spill a drop of drink. After lunch the teacher did a circle time. She said this was to wake them up after lunch!They sang us a couple of songs and then we sang 5 of our songs, using the props made from our nurseries. The children played with the sensory pouches which Hayley made. We were impressed that the children who were aged two and under were writing numbers and shapes in the pouches. They could count up to ten and name their shapes. They demonstrated their counting using the number cards which were made by one our nurseries.
Next we went in to nursery classes baby and middle. We showed the teachers how to make playdough. They were enthusiastic about this and made things alongside the children. The children and teachers made numbers, letters, bowls and even tea cups! The final class teachers made the playdough themselves.
We then carried out a Boogie Mites session with all of the nursery and Years 1,2,&3 primary. All the children joined in with the actions and were enthusiastic. They focused and concentrated throughout. The children picked up the actions quickly.
Lastly we sorted through some of the resources that have been kindly donated by parents this year. We audited how many of each resource we had. We still have some to sort through!
A busy but enjoyable day.